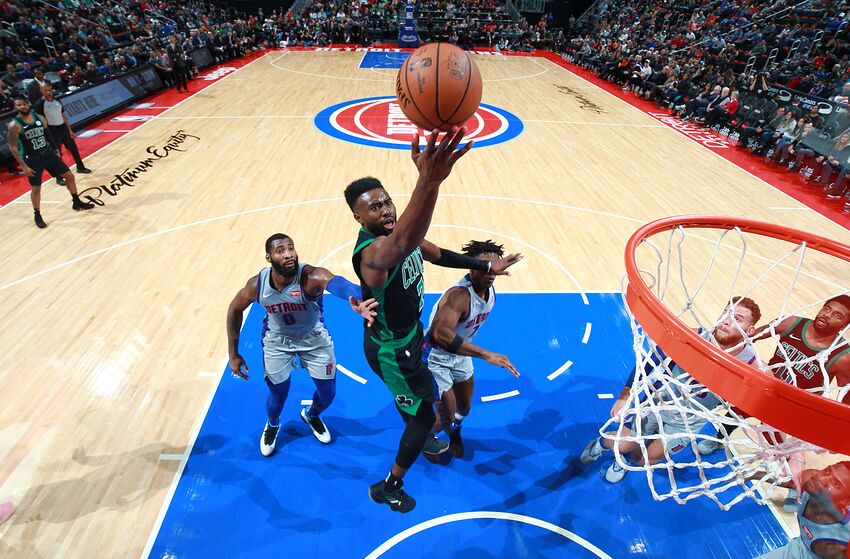 DETROIT, MI – OCTOBER 27: Jaylen Brown #7 of the Boston Celtics goes to the basket against the Detroit Pistons on October 27, 2018 at Little Caesars Arena in Detroit, Michigan. NOTE TO USER: User expressly acknowledges and agrees that, by downloading and/or using this photograph, user is consenting to the terms and conditions of the Getty Images License Agreement. Mandatory Copyright Notice: Copyright 2018 NBAE (Photo by Brian Sevald/NBAE via Getty Images)

The Boston Celtics made a statement with their defense on Blake Griffin Saturday, shutting down the Detroit Pistons star on their way to the first winning streak of the season.

After peaking its head out from the sand in Oklahoma City, the Celtics offense finally came to play for a full 48 minutes and the results were quite impressive. 14 made three-pointers and 25 assists on 39 baskets.

The ball was moving and the players were cutting with purpose and the shots were finally falling. Sometimes, basketball is as simple as sharing the love. Play the game the right way, make your teammates happy, and good things will happen.

Boston finally looked like the team we were all expecting, devastating Detroit with their length and tenacity and pinging the ball from great player to great player until the defense loosens up.

Here’s how each player graded out in the 20-point win.

Once again, Irving didn’t shoot well, finishing 1-for-5 from the field but it made up for it in a myriad of ways. Irving showed the maturity and growth his fans were hoping for when he joined the Celtics, focusing on playing great defense and running the offense when his shot wasn’t falling and the openings weren’t there.

Irving only scored 3 points, but he dished out 5 assists and snatched 7 defensive rebounds. He competed his rear off defensively, jostling with Blake Griffin on switches and providing timely help-side defense. The 6-foot-3 point guard also freed Al Horford for a handful of open three-pointers with a beautiful back pass he’s become a master at, though Horford missed his shots Saturday.

Throughout his career, Irving has been criticized as someone who is just a scorer and doesn’t help his team in other ways. Against Detroit, Irving proved he can help a team in a variety of ways, even if makes just one shot all game.

Entering the game in one of the worst shooting slumps of his young career, Jaylen Brown busted out in a big way, scoring 14 points in the first half while drilling all three of his three-point attempts. Brown finished the game with 19 points, on 6-of-13 shooting.

In addition, Celtics coach Brad Stevens gave Brown the unenviable task of guarding Pistons forward Blake Griffin to start the game. Griffin entered the game averaging 33.8 points per game, but Brown and Co. held him to just 7 points on 2-of-13 shooting. Brown’s harassing defense and tenacity fighting with Griffin for every inch of position went a long way in making it a long night for the Detroit star.

He sized up Griffin and nailed a sweet hesitation pull up three to put Boston ahead by 21 in the first half. The only knock on Brown is a couple of missed bunnies at the rim.

Gordon Hayward displayed his offensive versatility against the Detroit Pistons. He scored on a corner three, a transition trail three, a step back from the elbow, on a smart cut, and by filling the lane and finishing on the fast break. It’s this kind of diversity that keeps defense guessing, and allows Hayward to have an answer for every different challenge.

Hayward scored 15 points in 24 minutes on 6-of-11 shooting. He made 2-of-5 from deep. The 6-foot-8 wing also pulled down five defensive rebounds.

The 15 points were Hayward’s highest point total of the season and came on the heels of his lowest output, when he made one field goal and scored 5 points against Oklahoma City.

Hayward’s smarts and instincts give Stevens another layer to an already deep playbook. When Stevens is at his best diagramming plays, he uses his player’s strengths to put the defense in a no-win situation. With players like Irving, Hayward and Horford, Stevens has players who are adept at adjusting in the moment to the smallest defensive tweak.

For the first time all season, Tatum did not reach double figures in shot attempts. The second-year forward finished just 2-for-9 on a steady diet of mid-range jumpers and scored only six points.

However, the offensive diversity allowed the Celtics to find a rhythm they hadn’t had all season and Tatum was more patient and paint-oriented, even if he continues to pass up open three-pointers. Tatum also dished out 3 assists, including a couple really nice dimes to Daniel Theis that are great to see out of the young man.

The 6-foot-8 wing had a season-low three rebounds, but contributed to the overwhelming defensive effort that shocked Detroit. Tatum’s length continues to create problems, while his ability to read an NBA offense only gets better with game time.

The Celtics center played with the poise and prescience we’ve come to expect, but Horford had a poor shooting night and didn’t play much (20 minutes) as the lead stayed steady in the second half.

Still, Horford’s defense was critical in limiting both Blake Griffin and Andre Drummond and though he only had four rebounds himself, Al kept the Pistons from second-chance points with strong positional defense and boxing out.

Drummond was averaging 6 offensive rbeounds per game for Detroit, and Horford helped hold him to just two, and Detroit to just six, in the Celtics win.

Horford, however, missed all five of his three-point attempts and finished with just four points on 2-of-8 shooting. He dished out a season-low one assist.

As good as Brown, Irving, and Hayward were for Boston, the Celtics bench turned this game into a blowout with their outstanding play late in the first quarter and throughout the second quarter.

Daniel Theis and Marcus Morris both reached double figures in scoring in the first half. Theis finished the game with 17 points and 8 rebounds, while Morris had 18 points and 8 rebounds himself. Both guys played phenomenal defense in the paint, the key against the Pistons, and stretched the Detroit defense with their three-point shooting.

Meanwhile, Marcus Smart conducted the show, orchestrating 9 assists on the night. Terry Rozier chipped in 14 points and 8 rebounds, while pushing the pace for Boston fast break.

Boston’s bench outscored Detroit, 62-34, and continue to show they are going to be one of the best bench units in the league, capable of winning a game on their own in the right circumstances.

Next: Top Prospects in the 2019 NBA Draft

The Boston Celtics (4-2) and the Detroit Pistons (4-1) will play again on Tuesday, this time back in Boston. The Celtics will hope to make it three in a row and show their coach they can play consistent basketball, while the Pistons will look to get back in the winner’s circle after losing their first game.