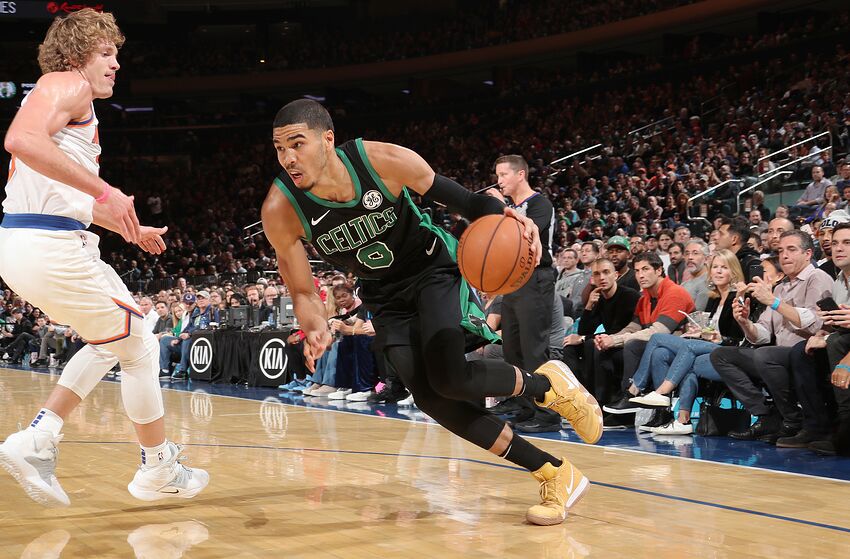 NEW YORK, NY – OCTOBER 20: Jayson Tatum #0 of the Boston Celtics handles the ball against the New York Knicks on October 20, 2018 at Madison Square Garden in New York City, New York. NOTE TO USER: User expressly acknowledges and agrees that, by downloading and/or using this photograph, user is consenting to the terms and conditions of the Getty Images License Agreement. Mandatory Copyright Notice: Copyright 2018 NBAE (Photo by Nathaniel S. Butler/NBAE via Getty Images)

Celtics star Jayson Tatum was cooking early against the Knicks in New York, wheeling and dealing his way to a double-double by halftime. The 20-year-old forward enters his 2nd season with sky-high expectations, and thus far he has not disappointed.

Jayson Tatum’s hot start to the season comes as a testament to all of the hard work he put in over the offseason. He held summer workouts with some NBA royalty, highlighted by a private session with Kobe Bryant.

Kobe’s advice has clearly rubbed off on the young star. Just check out the dazzling display of dribble moves he pulls off en route to an awe-inspiring reverse layup.

The offensive prowess of the young Jayson Tatum is special considering the man is a year removed from his teen years. His jump shot is almost as smooth as his handles, and his ability to get to the rim at will is elite. He will only continue to terrorize opposing defenses as he improves in all areas of his game.

Tatum scored 23 points and grabbed nine rebounds in the season-opening win vs. Philadelphi. He had 16 points in the loss to Toronto.

Next: Predicting Stats for the Celtics Starting 5

Through three games of play, Tatum has looked like the best player on the court and every bit as good as anyone could have hoped. Kyrie Irving may be the face of the franchise right now, but if Tatum continues to develop the way he has, there’s a good chance he could be the best player on this roster sooner rather than later.