When Kyrie Irving flung the game ball 20 rows deep into the Pepsi Center stands on Monday night, the source of his frustration, he said, was Jamal Murray, the Nuggets’ third-year guard who committed the cardinal sin of firing up a three in the closing seconds of a long-decided contest in a failed attempt to collect his first 50-point game.

Grumbled Irving, “The ball deserves to go in the crowd after a bulls–t move like that.”

Feel however you want about Murray’s move—it says here that griping about a player scoring within the span of a 48-minute game is in the family of feeling shown up by a home run hitters back flip; if you don’t like it, stop them from doing it—but the overeager point guard isn’t Boston’s biggest problem these days. The loss to Denver dropped the Celtics to 6–4 on the season and 0–2 on the team’s first extended road trip, which will wind through Utah and Portland before the Celtics head back east.

No one is panicking in Boston, of course. This isn’t Washington, where the Wizards are at a crossroads. It’s not Philadelphia, where the Sixers are working overtime to rehabilitate Markelle Fultz. It’s not Los Angeles, where the Lakers are showing early signs of dysfunction. The Celtics are loaded. They just have two players coming off major injuries and a roster still unsure of exactly how to play together.

Gordon Hayward will eventually be the All-Star the Celtics signed to a four-year, $128 million contract in 2017, but right now he’s a shell of himself. Anyone who watched Hayward fly around the floor in Utah for seven years knows Hayward isn’t right. At times it looks like he’s running through seawater, the sharp cuts and bursts that made him so successful in the Jazz system are now sluggish, his ability to explode to the rim virtually nonexistent. Hayward still has his moments—the 18-point, five-assist effort he had against Milwaukee being the best of them—but there are times late in games when it looks like he’s dragging that left leg up the floor. Last week, Hayward admitted there was some soreness in his surgically repaired ankle, while wondering if there could be some scar tissue in there he might have to grind out.

Again—perfectly understandable. Hayward missed all but five minutes of last season with the most horrific ankle injury you could ever see, needed another surgery to remove the hardware in that ankle last May and didn’t start playing five-on-five until September.

This isn’t a video game. Hayward needs time to rebuild after all of that, and Boston has pledged to be patient with him. 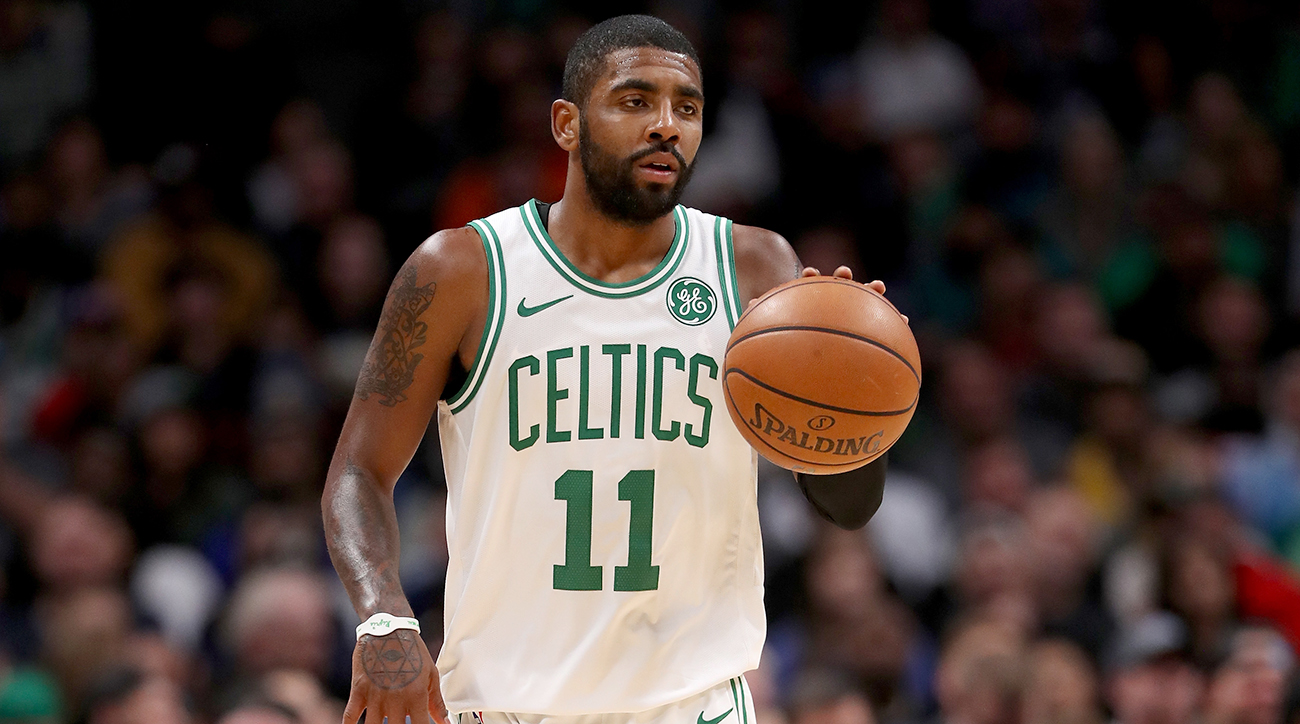 Irving has rebounded from a sluggish start. After connecting on 42.7% of his shots and 30.6% of his threes in October, Irving has caught fire, raising his percentages to 59.2/56 through three games in December. He was energized by early season criticism from Celtics legend Tommy Heinsohn—on a Boston broadcast, Heinsohn suggested that Irving was five-pounds overweight, a critique Irving later thanked him for—and in recent games has looked more like the improbable shot making MVP candidate the Celtics are counting on.

Irving will never be a prototypical playmaker, but with this Boston team he doesn’t need to be a Cleveland-level scorer, either. Irving admits there has been a learning curve here, as he adjusts to life as a primary scorer who needs to make sure his team’s wealth of scorers get involved early in the game. Late in games he can be the old Irving, as Boston will lean heavily on him to create offense down the stretch.

The real problem, for now anyway, is that the Celtics are still searching for an offensive rhythm. Boston is 27th in offensive rating, per basketball-reference, a tumble from the 18th they finished in the rankings last season and just ahead of the bottom-feeding Magic, Suns and Hawks in the category. They are a middle of the pack three-point shooting team while trailing only three-point bombers Houston and Milwaukee in attempts. They don’t get to the rim—dead last in that category—and as a result rarely get to the free throw line (29th in the NBA).

MAHONEY: Shadow of LeBron Can No Longer Provide Cover for Cavs

Firing up threes has become almost a default setting. Against Denver, Boston played a picture-perfect first quarter, outscoring the Nuggets 34–19. That Celtics team picked up assists on 12 of its first 15 made field goals, connected on 62.5% of its shots, made four of seven threes, engineered 10 points in the paint and totaled eight players in double figures. Over the next three quarters Boston launched 24 threes—and made five of them.

Even Irving—whose response to a question about whether the 55 threes Boston tossed up in last week’s win over Milwaukee was too many was “Never”—admitted the Celtics were looking for one too many kill shots.

“An easy two here, or getting the clock to stop and then having them run another possession, it could always equate to us getting back in the game,” Irving said on Monday. “So I think down the stretch we shot a few too many threes rather than taking the easy ones.” 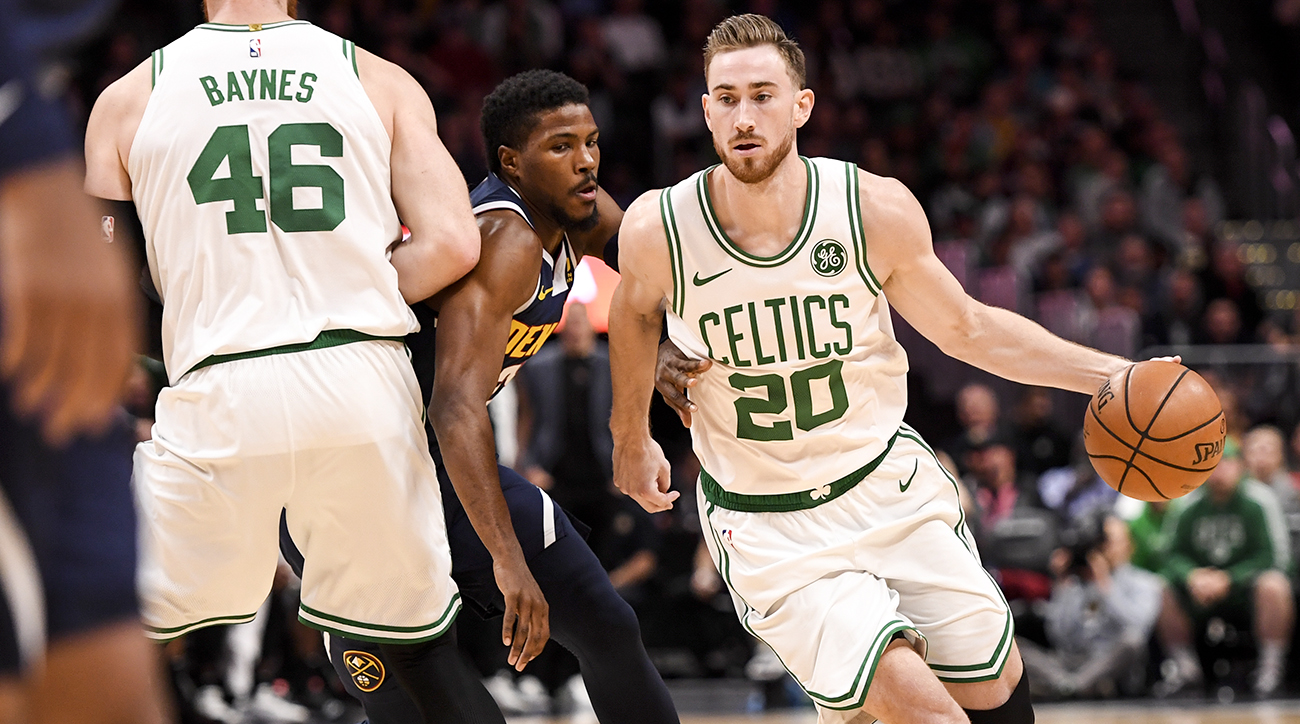 A reliance on the three-point shot is nothing new—the Celtics ranked in the top-10 in the league in attempts the last two seasons, and are well on their way to ranking high in that category in this one—but Boston has the horses to be more balanced. Jayson Tatum, who followed up a stellar rookie season with an offseason spent packing on muscle and working out with Kobe Bryant, is impossibly long with a slippery first step. Tatum admits he has noted defenses keying on him more this season, but the return of Irving and Hayward should create more one-on-one opportunities, which should in turn earn Tatum more trips to the free throw line—where he’s shooting a robust 89.5%.

The same goes for Jaylen Brown, whose free throw attempts have ticked down from last season, and Al Horford, whose three-point attempts have spiked to a career-high 4.8 per game while his three-point percentage (29.2%) has cratered to a four-year low.

Terry Rozier’s three-point shooting is actually up from last season (39.4%)—it’s everything else that has ticked down. Rozier was the most likely candidate to be collateral damage from the influx of talent to Boston’s backcourt, and publicly Rozier couldn’t have handled it better. He defused any talk of a point-guard battle at the end of last season when he declared Irving the starter—an obvious statement but a useful one coming from a point guard who played like an All-Star in Irving’s absence—and has been a good soldier in the early stages of this one. But Rozier is also a free agent next summer and Boston, which will have to make a huge financial commitment to Irving to keep him, likely won’t be the team to sign him.

Is Rozier pressing? A year ago, failed extension talks contributed to Marcus Smart’s slow start to the season. Celtics coach Brad Stevens has made finding Rozier minutes a priority, playing him alongside Irving in addition to backing him up. But the freedom Rozier had as a 37-minute per game starter in last year’s playoffs is gone, and won’t be there while Irving is healthy. Adjusting to that new reality is a work in progress.

Look, Boston will be fine. The defense is No. 1 for the second year in a row and as Hayward gets his legs back his playmaking will become an even bigger asset with a first unit loaded with scorers. But the early-season struggles are relevant because of what is going on around them. Toronto has effortlessly incorporated Kawhi Leonard into a deep and talented roster. Mike Budenholzer has buoyed Milwaukee from the bench while GM Jon Horst’s strong offseason has surrounded Giannis Antetokounmpo with shooters. Privately, some Celtics officials have wondered if it will be possible to keep pace with Toronto in the regular season.

Home court advantage has been critical for Boston the last two postseasons. They won a Game 7 in TD Garden in the conference semis against Washington in 2016 and eliminated the Bucks in the first round on the parquet last year. The second and third rounds of the conference playoffs will be street fights, and it’s never too soon to think about where the deciding games of those battles will be played.

There’s plenty of time for the Celtics to right the ship, and they will. Where they will be in the conference standings when that happens is the question.