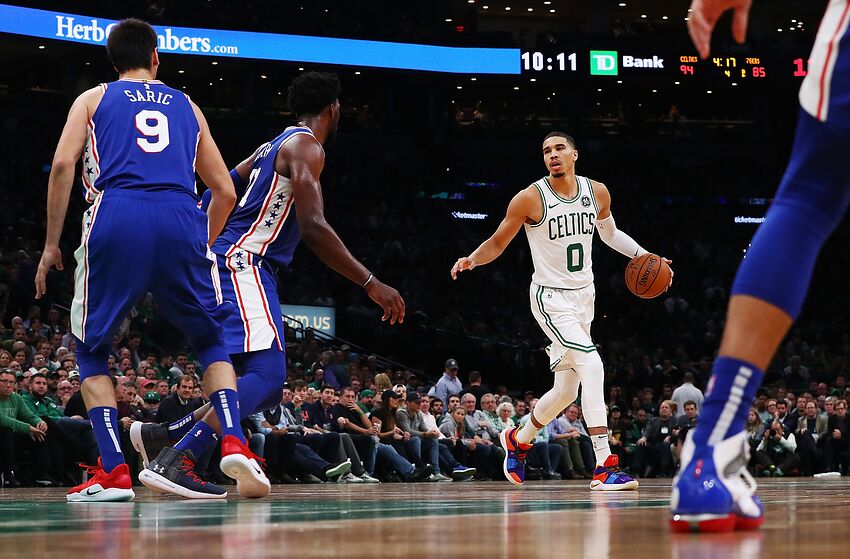 BOSTON, MA – OCTOBER 14: Jayson Tatum #0 of the Boston Celtics dribbles the ball during a game against the Philadelphia 76ers at TD Garden on October 16, 2018 in Boston, Massachusetts. NOTE TO USER: User expressly acknowledges and agrees that, by downloading and or using this photograph, User is consenting to the terms and conditions of the Getty Images License Agreement. (Photo by Adam Glanzman/Getty Images)

Calm down: Boston Celtics are going to be just fine by Talar Kahwajian

Three games into his second season, Boston Celtics sophomore stud Jayson Tatum isn’t waiting for success to come to him.  He’s taking it.

From third overall pick in the 2017 NBA Draft to potential All-Star in just a little over a season.  Talk about a whirlwind. Boston Celtics second-year man Jayson Tatum is rising up the ranks of NBA stardom faster than anyone ever expected.

He had a great opening game against the Philadelphia 76ers, however, no one expected his dominance to continue at the rate it has.

We’re only three games into the season so I don’t want to get too carried away. However, seeing this kid just ball out in all three games so far has been extremely exciting as a Celtics fan.

Tatum’s strongest game came in the Celtics most recent contest against the New York Knicks on Saturday night. He posted 24 points and 14 rebounds. 14 REBOUNDS.

I adore Tatum’s scoring and his smooth finishes. But that rebounding number really gets me excited, especially when he’s averaging 10.7 rebounds per game through three for the C’s.

He can be an All-Star this year.

I said I wouldn’t get carried away, and yet here we are.

Yes, this kid can absolutely be an All-Star in the Eastern Conference this season. He’s taken control of his game and commands respect from opposing teams. His length bothers defenders and allows him to deflect passes and snag rebounds.

The key to anyone succeeding in this league is ultimately staying healthy.

A healthy Jayson Tatum will continue to make strides, and he has the perfect organization and roster to help him reach new heights. Brad Stevens can keep Tatum from getting too high on himself, as can Al Horford, Kyrie Irving, and Gordon Hayward.

Next: Matchup with Knicks proves Kyrie Irving is in the right place

On a team full of superstar talent, Jayson Tatum is well on his way to becoming the one that shines the brightest.

Marcus Morris is questionable for Monday with knee soreness
What’s Wrong With the Boston Celtics Offense?