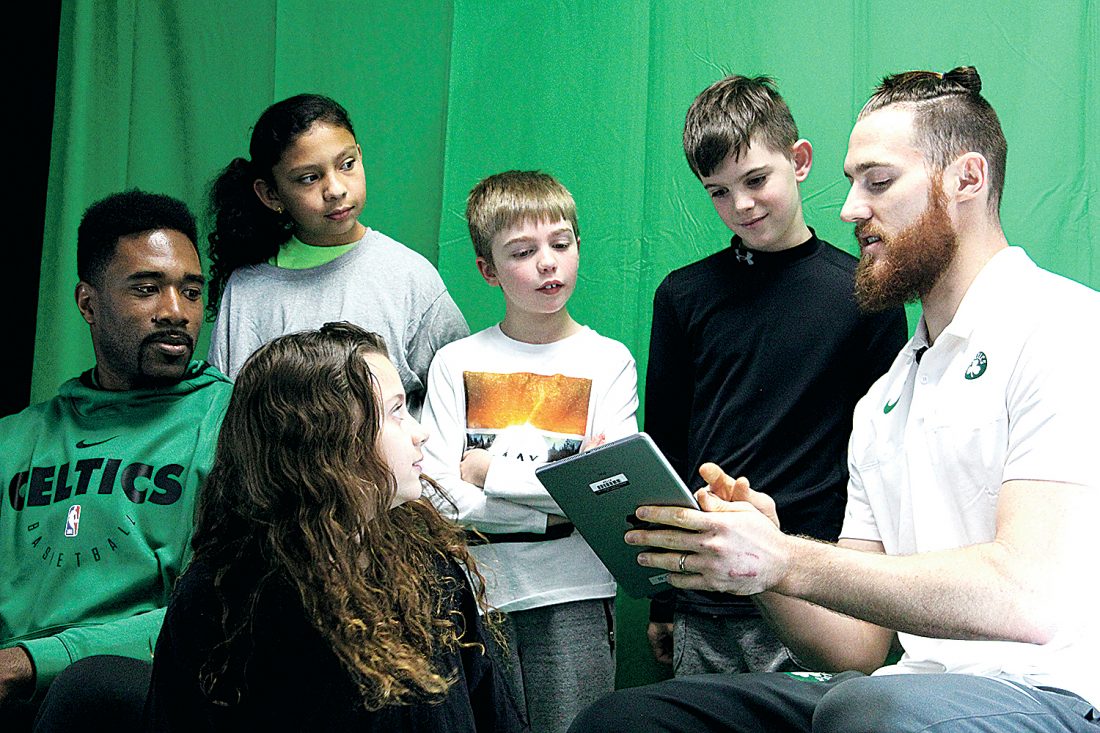 NASHUA – Fairgrounds Elementary School students saw green on Thursday in an unveiling of a new technology lab with none other than two representatives from the Boston Celtics.

This is the 12th technology lab created in New Hampshire and Massachusetts on behalf of the Celtics and Southern New Hampshire University. The drive behind opening science, technology, engineering and mathematics (STEM) labs is to increase the access to technology for students. The labs are designed to help students build skills in various problem-solving areas, such as coding and research.

Nashua Board of Education members on Jan. 7 voted to accept the SNHU and Boston Celtics Technology Lab Grant.

The school’s grant application, which was attached in the board’s agenda packet, read, “While our overall math and reading scores have soared from being amongst the lowest in the state to at or above average, our science scores are still in need of improvement and that is one area we would love to utilize this opportunity to expand on our math success and make cross curricular connections in science via technology and a Technology Learning Lab.” 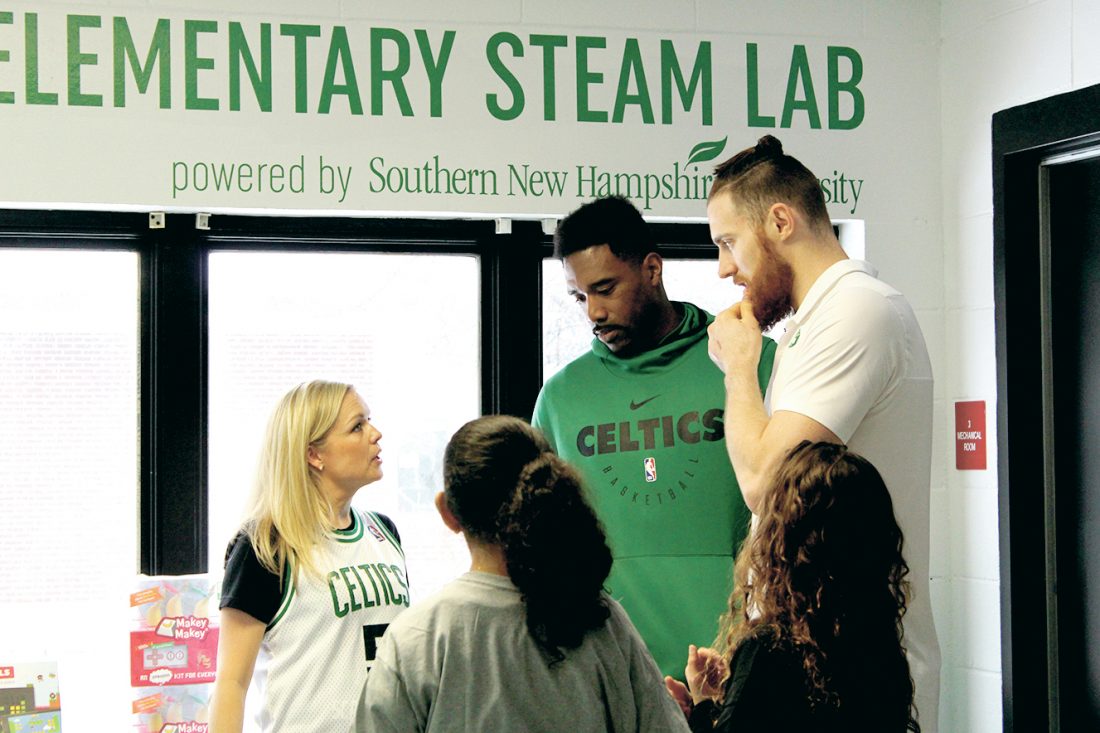 In the application it is also noted that some students are in a student technology leadership program called Generation Yes. “Generation Yes believes all student should have opportunities for personalized learning, help drive how technology is used in our class, be prepared for the 21st century workforce and engage with their community, as well as, serve their school,” the application reads.

Twenty-five third, fourth and fifth-grade students are involved the program. One student is fifth-grader Giovanna DePaula, who had the opportunity to help plan what students wanted in the lab.

On Thursday, she said she thought the technology lab turned out “fabulous” and was surprised to see a painting on the wall of TD Garden.

“The room is better than my house,” DePaula exclaimed. DePaula, who has interest in math and history, said she had wanted the school to be more “for the future” so she and other students could “create stuff nobody else has created.”

“If we have more activities, it makes the brain stronger. The brain doesn’t get stronger by itself,” DePaula added. 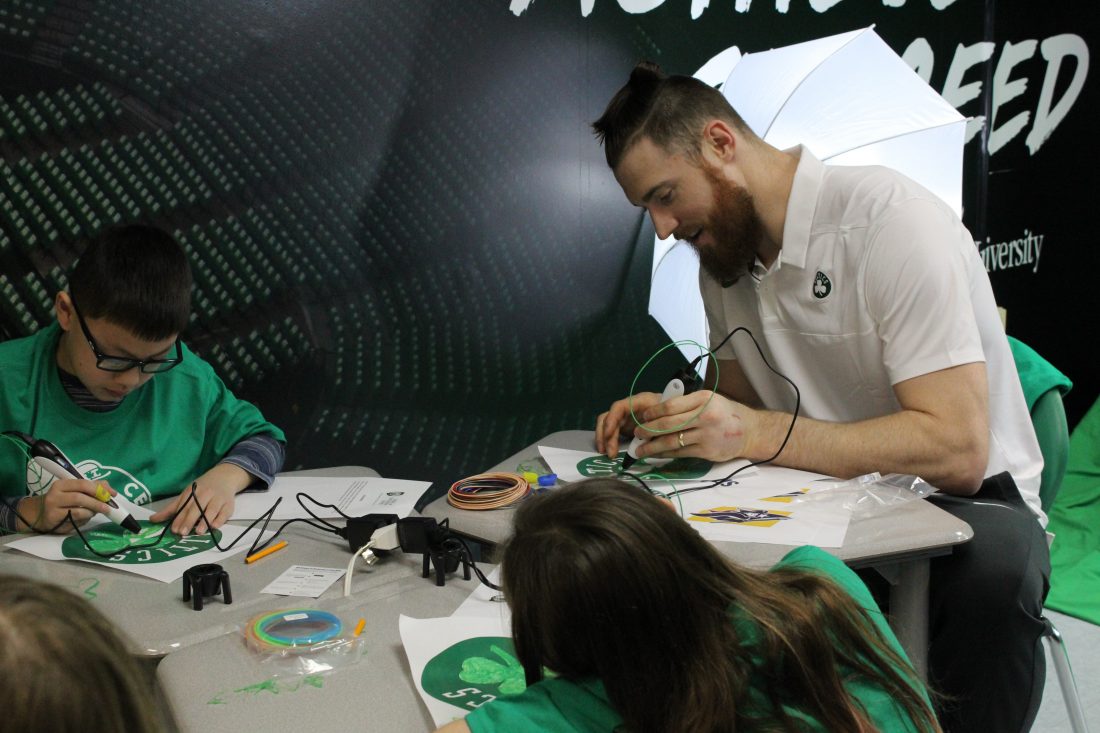 The morning began with a greeting from Dave Hoffman, vice president of community engagement for the Celtics, to get the students amped for the day. The students had already begun testing out some of the new equipment in the lab.

The three of them split up and visited different stations with the students.

A group of students got to film a pump up video similar to the ones put out by the Celtics by using the classroom’s new green screen and iPad. Powe and Baynes were in the film as well. 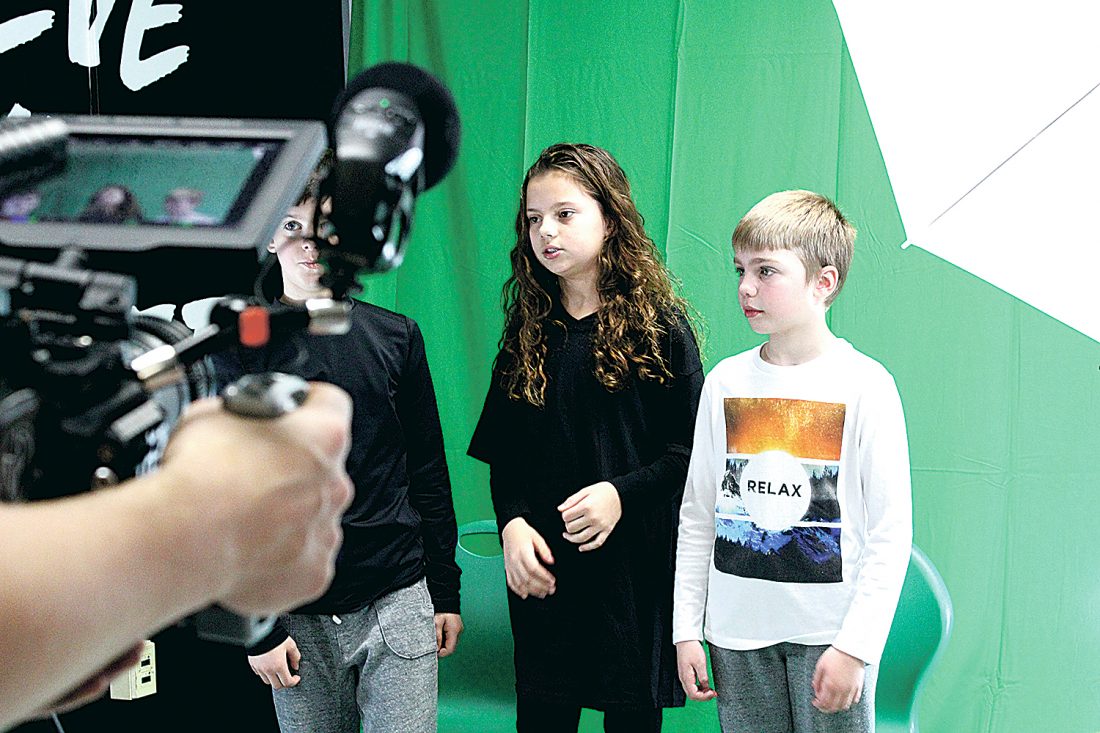 After the activities, there was a question and answer session with Baynes, Powe, and representatives from SNHU and the Celtics. The questions asked of Baynes and Powe ranged from when they made their first dunks, to the most famous person they’ve ever met. The Q&A session also served as a time of reflection.

“For you guys to step up in front of everyone, that says a lot,” Baynes said, in reference to the students who filmed the pump up video in front of their entire class.

Powe gave advice to the students about finding even just one thing for which they have passion.

“Find something you love,” Powe said. “It will all work for you and come to fruition eventually.”

He told students he had always been interested in technology and innovation. Powe now works as the Celtic’s community ambassador. The students expressed excitement about meeting a professional athlete. 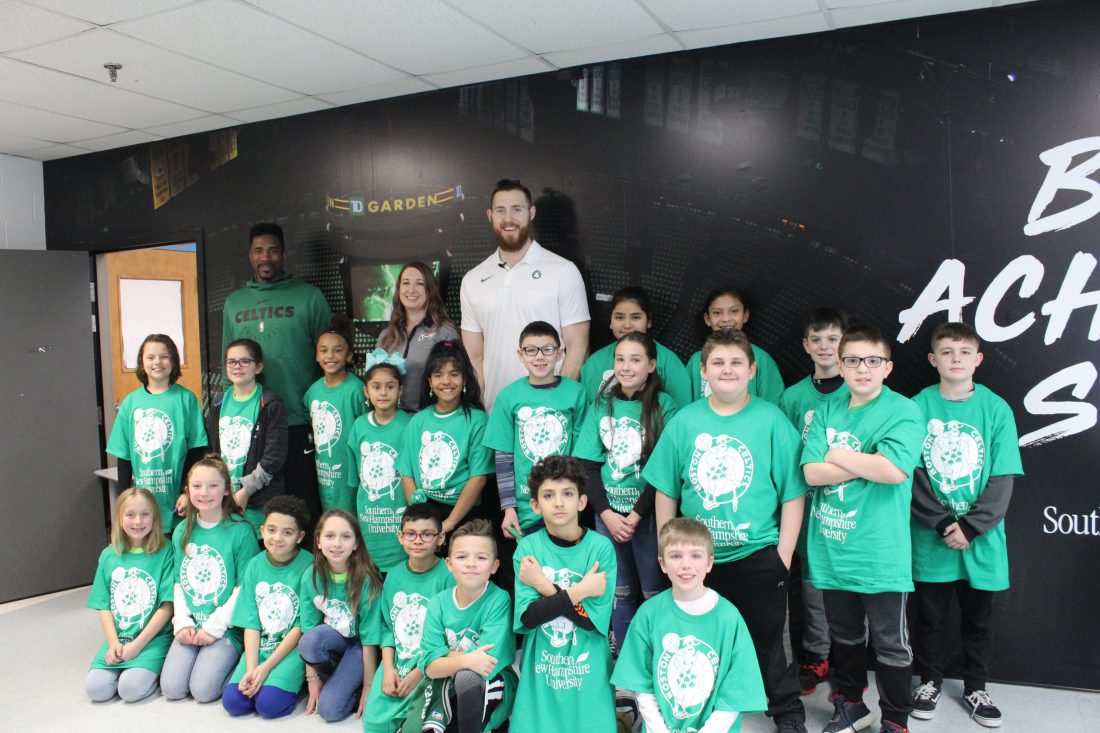 Baynes told the students, “If I can change one of your days and put a smile on your face, it puts a smile on my face.”

After the questions and answers, as part of a tradition, the university representatives and the Celtics signed the wall with an inspirational quote and their autographs.

Baynes wrote “Kaizen,” a Japanese word meaning improvement. The word is on a banner hanging in the Celtics’ practice facility in Brighton, Massachusetts, to encourage continuous improvement every day.

“Work hard in everything you do,” Powe told the students. “Always try your best.” 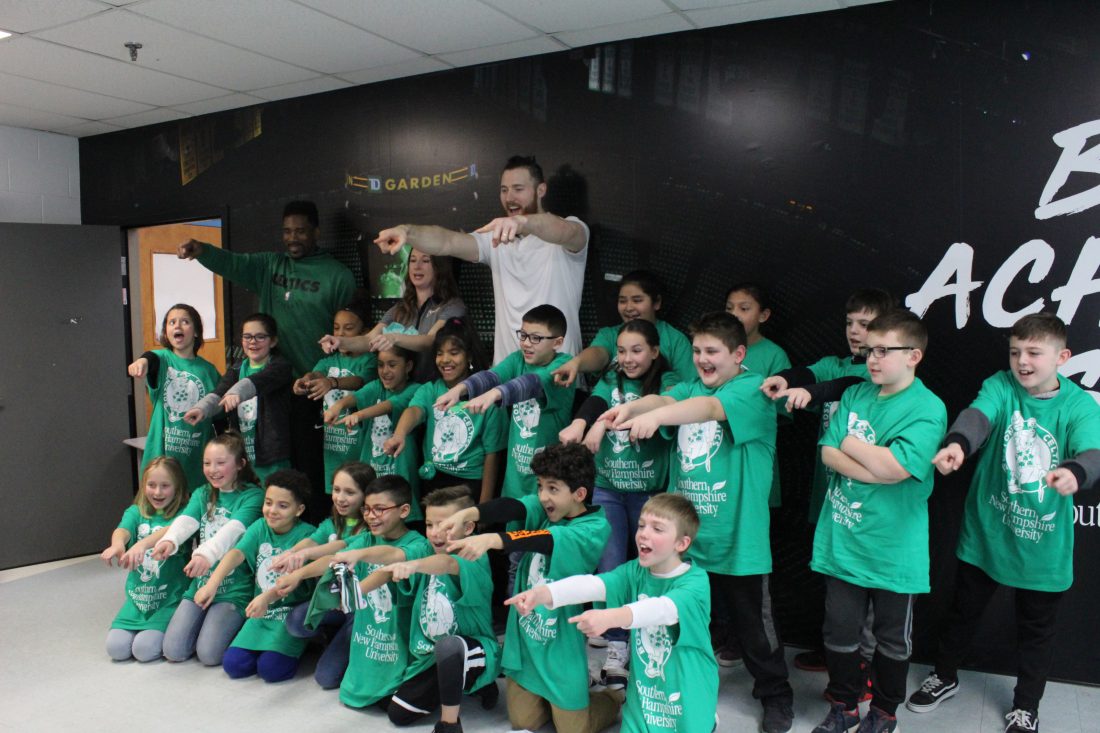 Foss wrote “Believe in Yourself.”

The visit brought a lot of positivity to the classroom. The school’s media specialist Kim Reich said she was in awe after seeing the STEM lab, and was really excited for the kids. Media technology assistant Kayla Roberts said the lab will provide so many opportunities the students wouldn’t have been able to provide themselves.

“It never gets old seeing the kids’ faces when they see the Celtics, and they are really into the technology,” Keane said.

“The reality is, a lot of these kids don’t have access to technology that they need to be successful in the workplace and beyond in the next 10, 15, or 20 years. Seeing all these young people enjoying themselves and learning, it’s really special,” Keane added.

Grace Pecci may be reached at 594-1243, or at gpecci@nashuatelegraph.com. 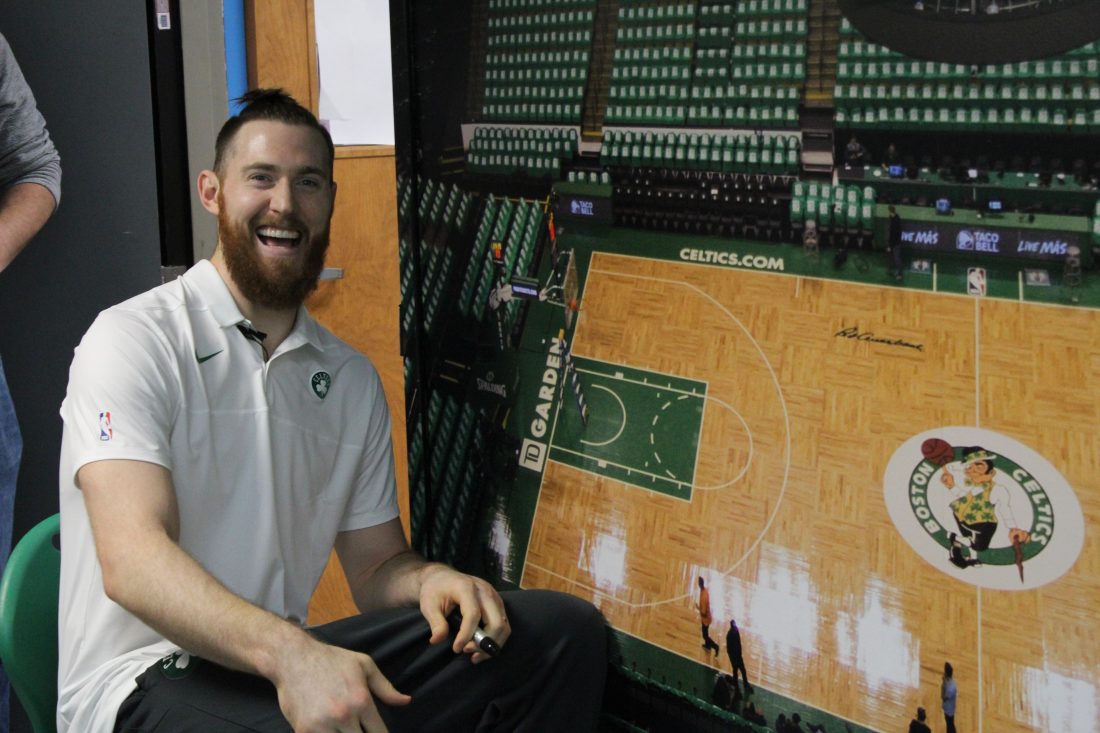 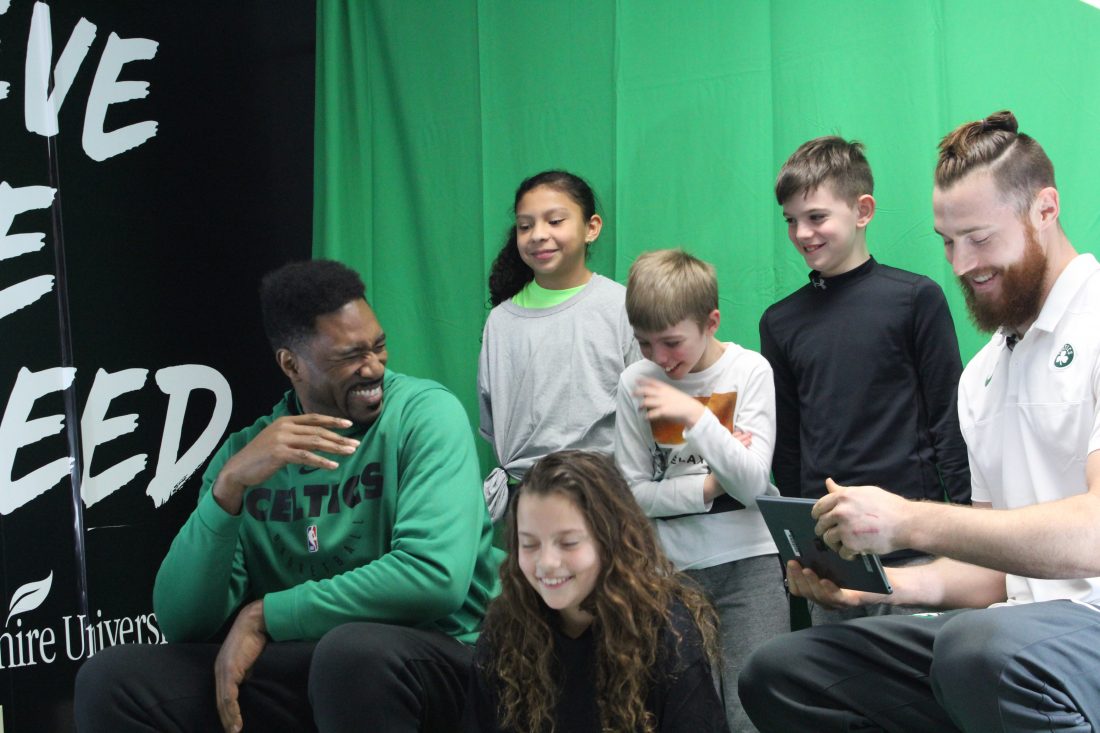